Fond Recollections of Our Not So Humble Servants in India

We’re looking for funny experiences from your own lives. We think others will enjoy tales of food mishaps, surprises, peculiar edibles, first cooking attempts / mistakes, etc.

In this issue, instead of tales of food mishaps & surprises, etc., we’re sharing Margaret Deefholts’ humorous tribute to two tempermental, but accomplished, cooks from her childhood.

Mariah Das was no fancy looking guy. Barrel shaped and slightly bow-legged, he had only one front tooth the colour of old cheese, and hair as tight and springy as a Brillo pad. He held sway as chef and major-domo of our household for as many years as I could remember-and was, in fact, my Dad’s cook-butler long before my parents were married.

When my father announced his wedding plans, Mariah Das handed in his resignation. He had no intention of kowtowing to some la-di-dah young woman who would haggle over the prices of his bazaar accounts, dole out rations from locked pantry cupboards, grudge every extra ounce of butter or rice, and criticize his culinary expertise. Dad talked him out of it with an assurance that the memsahib was quiet and non-interfering-and backed his statement up with a modest salary increase. Mariah Das growled, but acquiesced.

My mother, a 21-year-old bride, with absolutely no idea at all about running a household greeted this news with relief. Like many of us growing up in India, she’d never seen the inside of a kitchen at her parent’s home, and quailed at the thought of entertaining my father’s office colleagues, his bosses and their wives-not to mention a large social circle of Dad’s friends and acquaintances.

Mariah Das rose to these occasions with aplomb, taking charge of five course dinner menus-soups, appetizers, main courses, desert and after-dinner coffee or tea. Mother never questioned any of this. It was Mariah Das (not Mum) who organized the lesser household minions: the masalchi (kitchen boy) who did all the tedious cutting up of vegetables, grinding of masalas, (spices) cleaning chickens, chopping up hunks of beef or pork or mutton; stood over the scullery lad while he polished the cutlery china and glass-ware to gleaming perfection, and hovered over the shoulder of the bearer (waiter) as he laid out the table with crisp napkins sitting fluted or fan-shaped on side plates. The bungalow mali (gardener) in keeping with Mariah Das’s instructions, provided centrepieces of fresh cut flowers.

By the time I arrived, a year after Mum and Dad were married, Mariah Das was thrilled with the latest addition to “his” family. “She was born before my very eyes!” he would boast to anyone who would listen-a pardonable exaggeration since it entitled me to special privileges. If I threw a tantrum with my ayah, it was always her fault…not mine! He would lift me onto his lap, his kurta (shirt) smelling of garlic, coriander and mustard oil, and croon Tamil songs (he was a Madrassi from South India), and promise me an extra serving of “caramel custard” (my weakness) if I would behave like “a good little missy-baba.”

I have no idea how old Mariah Das was. He seemed ancient. His skin was polished ebony and his voice was Satchmo-gruff. But even over a space of fifty years plus, I still remember-and marvel-at his kitchen wizardry. He could produce just about anything. His repertoire encompassed spicy vindaloos, tangy Mulligatawny soups, fluffy pilaf rice and vegetarian buffaths, or Western style dishes: steak and kidney pies, mince-filled potato rissoles, and crepe “pan-rolls”. His deserts were legendary too. “Roly-poly” (trifle) puddings, semolina halva, gulab-jamuns, wickedly decadent chocolate soufflÈs or cakes, and fruit compotes nestled in pastry as light as a maiden’s fancy! The astonishing thing was that all this came out of a kitchen with no electronic gadgets-just a wood or coal-fired open flame clay chula (stove) and an oven consisting of an aluminium box placed on top of the chula. How he monitored or controlled cooking temperatures remains a mystery.

When my sister made her appearance, Mariah Das had a new baby to coo over-although I still remained his favourite “first born”. He was, however, by then in indifferent health and little over a year later, was diagnosed with abdominal cancer. He wanted to go back to his ancestral village in South India to “retire” and it was an emotional farewell. Dad paid his rail fare, and continued to send him a monthly stipend until he eventually passed away not long afterwards.

My mother was faced with a series of domestic cooks who came and went as frequently as our family transfers across the length and breadth of India, Dad being an officer on the Indian Railways.

We eventually wound up with another “character” who was with us for the next fifteen years. This time it was a woman-and to begin with Kannama wasn’t a cook at all. She signed on as an ayah to my sister Phyllis when we were stationed in Madras-but at eleven years of age, Phyl decided she didn’t need a woman-servant hovering over her. Kannama offered to try her hand at cooking, and my mother took her up on this. Her culinary talents were, to put it mildly, pretty awful to start with (my mother’s were even worse!), but she was a good learner and soon started serving up dishes which, although not a patch on Mariah Das’s meals, were reasonably palatable.

When we were transferred from Madras, Kannama (a spinster) was eager to come with us to Guwahati in Assam. The move brought about a personality transformation.

Kannama looked like a little walnut-brown, crinkled and compact. She had eyes as sharp as razors and a tongue to match. We soon found out that she was a force to be reckoned with, for in her new environment, as a “privileged” family retainer, the rest of the household domestics were, in her opinion, mere serfs. She cowed the house peon (a very simple young villager) by convincing him that she’d once decapitated an offending menial, bawled out the milkman (whose cow was milked in our backyard under her gimlet eye), with accusations of diluting the milk in some mysterious fashion between udder and container and, worst of all, threatened to cut off the poor old sweeper’s fingers if he didn’t swab the bathroom floor properly! My mother had to intervene in the last instance by assuring the sweeper that his digits were safe, and by taking Kannama aside and cautioning her to “cool it”.

Like Mariah Das, Kannama spoke English-after a fashion. Our dog, Blackie, whom Kannama adored, was a “my black arsie” (horsey). She had a passion for animals, and the backyard became a menagerie: kittens, stray dogs, their puppies, a goat, and a cockerel with his flock of hens. When we eventually left Assam, Kannama bade a tearful goodbye to all her pets. Most of them had been relocated to good homes, but when the new owners came to collect the chickens, Kannama said, “They closie their eyesies! Not wanting to say ta-ta to me….Ayeeeee!”

After Guwahati, we lived in Bombay and Kannama had her own room in the servants’ quarters adjoining our apartment. My sister and I were now in our early twenties, and Kannama cast a critical eye on our fashions and boyfriends. “No wear such tight-tight skirts Missy Baba – men will be thinking bad-bad things.” However, she was delighted to cater for a small at-home reception after Phyllis’ wedding, and beamed with pleasure when I brought my newborn son Glenn, home from the hospital. He was colicky in those early weeks and Kannama was convinced this was caused by someone who had cast an “evil eye” spell over him. “She smeared his forehead with a sooty mark to avert envious glances, and performed a ritual exorcism by roasting dry red chillies on the kitchen stove. “See,” she said ominously, “eyes are not burning from the smell! That means evil eye is hurting Glenn sonny-baby!” She wore a grin of smug triumph when-whether by coincidence or not-shortly after this exercise, Glenn’s colic attacks faded away entirely.

When my father was on the brink of retirement and he and my Mum were about to move to Canada; when Phyllis and her husband had left India, and my husband and I with our two toddlers were also poised on the threshold of immigration, Kannama decided it was time she did likewise. She announced that a “friend” had found her a job in Kuwait, and that her passport and papers were in process. When she said goodbye to us, she looked old, bent and a little tired. I had the feeling, however, that she would soon settle down in her expatriate role and endure-spirited and feisty-for many more years. 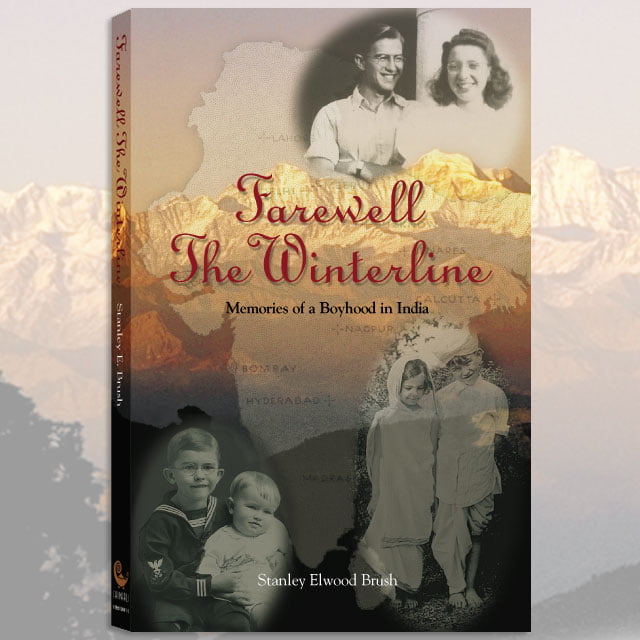 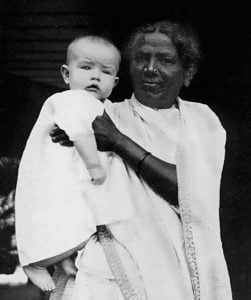